My Best Friend is a Pioneer

Staring at my laptop. I got the 80's music channel on the TV. I only turn it to the 80's when the Alternative channel plays a song I don't like. Just now it was The Raconteurs Live from London and sounding terrible. The 80's channel welcomes me with a true classic: Stone Roses singing "I Wanna Be Adored." Excellent. I a sip on an iced mocha I made on my espresso machine downstairs. In 1987 in Pusan, Coffee was instant and Espresso was unheard of.


June 7, 1987
Sunday. Slept in and went to the 학원 and cut out a rad ad from a magazine and then went to the base and enjoyed a hamburger (delivered to the gate). Went to Haeundae and cruised. Home and spent it in.


June 8
Monday to class. The dude brought my stereo.* It is OK.


June 9
Class and lovely weather. Carrie came over for a while. She is really smart and attractive** and I dig her but she has too many secrets. Lately Mr Moon is a dick and he pulled dick and told me in class that he needs me to be better. I think he is a dick. I was pissed. I mean nothing to them, why do I worry so much for them?


June 12
Went to Young-Do and around there. Mr. Moon hasn't been to class since Tuesday. Hmmm... There are serious demonstrations going on in front of the university these days. Korea Times had a headline with "미국놈들". I don't care. Went and played some table tennis. It was fun. Last night Carrie and Miss Jeong and I went to a dance place. We talked and danced. Carrie and I danced together slow and she is rad. I wanted to rifle her but I couldn't. Tonight we talked for a while on the phone. She tried to tell me she and Miss Jeong are "bananas." Interesting theory. "Yellow skin, white on the inside."


June 14
Yesterday no time. Met the rad duckies and changed tapes, dinner and the "downtown." Expensive but fun. We danced. There were many radsters. I am really impressed with Carrie. I called her and we talked and are apparently hung up on each other. Am I hung up? I think so but why? And is it OK? I don't know. She asked me why I came. Why did I? I would love to love her. But for how long? I've only been here one month. I don't know. Tomorrow is hoop. She said she was coming. 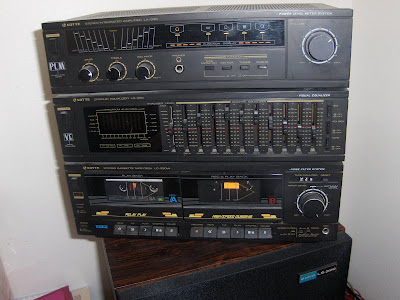 I bought this stack at the Lotte Pioneer store just down the street from my apartment. It was expensive at the time. But I really needed something to listen to music on. Tapes were cheap and CDs not available yet. So I bought a dual cassette deck, a graphic equalizer, and those two big speakers that would play louder than would ever be acceptable in my apartment complex.


**Secretly I wonder what the protocols are for posting pictures of somebody one hasn't seen or heard from in over 20 years. Somewhere I think I have a super cute picture of her in a Kimono standing in front of a tourism poster of Japan.
Posted by White Rice at 1:58 AM