A Journey of a Thousand Miles Begins with Catching Your Flight

A guy from my Korean class--who was also a Taekwondo athlete training for the 88 Olympics in Seoul--had some travel connections and got me a flight out to Korea on the 20th of April.

I finished my final exams and headed home for a few days. My friend Ken was driving through and his sweet diesel Rabbit (the one with the unsanded and unpainted bondo on the side) broke down out on the interstate. I drove out and picked him up and my dad paid to tow the piece into town and to get fixed. Ken spent one night at our house. My little brother had his first kiss and told Ken all about it.

I saw a few other friends and family briefly, and then left on a plane on Sunday.

I had arranged for an extra day in LA to see some friends. Todd and Francene picked me up and I crashed one night at their place in Bellflower. Monday we played golf with Remington--who was down from Edmonton for some reason--and some other dude I have no recollection of. The play was superslow and by the 7th hole it finally dawned on me I might miss my flight. We passed a group on 8, played the ninth, and jumped in the car. Remington drove me to LAX in his Prelude. I was late and getting panicked and he drove faster and faster. He was routinely over 100 mph as we darted through traffic. When he dropped me at the curb it was only a few minutes before departure. The TSA didn't exist yet, and I was rushed through to the gate only to find the plane had already pulled out. Falling under the category of "things that would never happen today," they drove me out to the plane and I climbed a long metal staircase to board while everyone else waited.

Despite the inauspicious beginning, I eventually landed at Kimpo on April 21. I was completely exhausted, except for the overly active butterflies in my stomach… 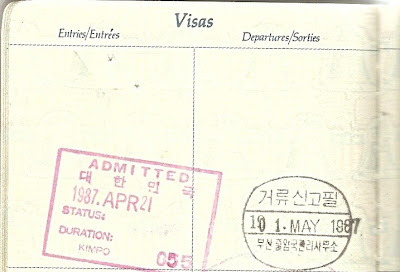 Screw Homework, I'm off to the Tanning Salon

Over the course of the Fall Semester of 1986 I put a lot of thought into going to Korea to teach English. I needed to make some money and I needed a break from university. But, believe it or not, Al Gore hadn’t “created” the Internet yet so I had no online resource for travel to Korea. I didn’t even know anybody who had been to Korea before, let alone taught English there. I really wasn’t sure if it was the right move for me at the time. But wheels had been set in motion and I was about to be caught up in it all.

Spring semester 1987 came and I signed up for a Korean 101 class. One thing I have always really hated is feeling like I am the clueless one in the crowd. (I’m not sure if I was always that way or if being a foreigner in Korea made me that way.) I figured I should at least be able to read Korean and utter some basic greetings and what not.
“How much is this”?
“What is your name”?
“Where is the nearest bathroom”?

All the while I kept in contact with Shin. We talked about timing and other logistics. He told me what applications I needed to file. I sent him a copy of my transcript and a couple photos. At that time a 4-year degree was required to get a teaching Visa, but Shin told me it would not be a problem that I didn’t have one. (It wasn’t until I was over there and working that he came clean and told me that a few carefully placed envelopes of cash had cleared all obstacles to my Visa.)

Anyway, that Spring semester went by infernally slow. I filed my applications at the Consulate.

I tried to cram a bunch of basic Korean into my head while blowing off Pascal Computer Science class (in hindsight that was a great decision). By the time I finally got my Visa there wasn’t much time left to do anything but book my travel and pack my bags.

Posted by White Rice at 5:57 AM No comments:

I was young. I was rad. It was the fall of 1986 and I was not thrilled about being a student in my 5th semester at university. I wasn’t really progressing toward a degree that I was interested in and my love life was as much miss as it was hit. I had some good friends and was making decent enough grades, but I was restless. I needed to get away. Plus I was broke. PELL grants covered tuition and books, but not much else. I was also getting $250 per month from my Dad and that was it. Broke I tell you.

That fall I saw an advertisement in the school paper to teach English conversation in South Korea. Interested parties were to contact a Mr. Shin at the KHI Institute in Pusan. There was a phone number. On a lark I called it.

Mr. Shin’s English was decent enough and we talked for quite a while. His institute was only one block from the main entrance to PNU (Pusan National University) so all the students were college-age. Most were cramming for their English Language job interviews and they really needed conversation practice with native speakers. If they failed the English portion of the job interview, they wouldn’t be able to get a proper job upon graduation. Fair enough.

Shin made the whole deal sound pretty sweet—it didn’t take much to sell it to a bored, restless, broke college kid.

The details were all spelled out in an 18 month contract: I would apply for a teaching Visa, he would provide an apartment, pay my utilities, and pay for a round-trip plane ticket at the end of the 18 months. The pay was to be a whopping 13,000 원 per hour—laughable by today’s standards, it was a huge sum to me at the time. And if I got any additional jobs outside the Institute, the pay would be even higher (although Shin and I would split the pay 60/40 for any outside jobs he got me).

This is not a 학원 horror story like so many you’ve heard already. But all of this happened well before there was a Dave’s ESL Café, or even the Internet, e-mail, blogs, cell phones, or any of the other things teachers in Korea use to communicate or raise awareness to unfair employers. It’s hard to even conceive of ex-pat life in Korea today without any of those things.

In the end Shin and I decided to give it a go…
Posted by White Rice at 2:00 AM No comments: