During a break from pinning dyed fabric in 2001, I snapped this moseup of the Master against an Autumn sky. You can tell from his face that he loves me right? 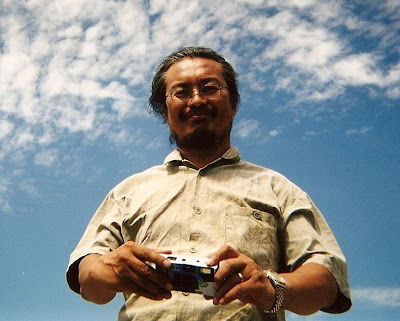 I might've mentioned the recent email I got from him. In it he told me to view KBS 인간극장 95~99회 (꽃반지 끼고 은희네집). Since I am not currently in the Korea, I have to jump through a number of red-tape hoops before I am allowed to see it. Feel free to check it out if you want to see The Master, his famous wife, and kids. Then tell me how much you loved it. I'll be jealous until KBS decides I am a worthy enough foreigner to see it.
Posted by White Rice at 5:45 AM 1 comment:

Earning My Room and Board

The almost daily work of dyeing the cleaned cotton fabric rolls continued. The Master's mom (pictured standing) and other neighborhood ajummas folded the rolls through the persimmon juice, carefully soaking every inch. 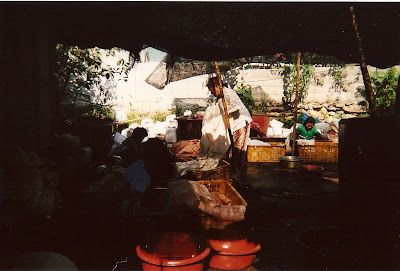 My contribution was to walk around and reload their tubs by pouring more persimmon juice in. I also entertained them by terribly singing 1980's K-Pop (그러나 그 시절에 너를 또 만나서 사랑할 수 있을까). 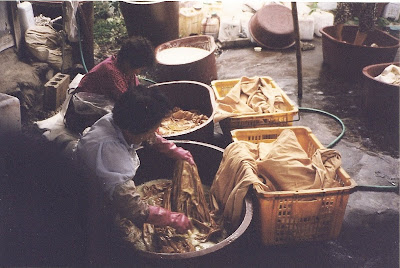 When the fabric was thoroughly steeped in the dye juice, I would run each one through the spin cycle on a lidless washing machine. Then we would load the massive moist piles into the van and drive them about 200 meters up behind the house to an open field. There were long drying stands covered with a black plastic mesh. Using sharp pins shaped like the numeral 2, we would pin the fabric out to dry. The sun and the salty coastal air was supposed to be good for getting the proper color from the dyeing process. Witness: 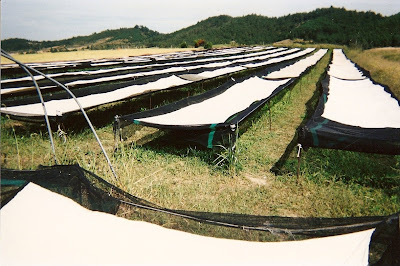 After a few times through the whole cycle (dyeing, spinning, pinning, drying, unpinning, repeat) the fabric would take on the rich brown color seen here. 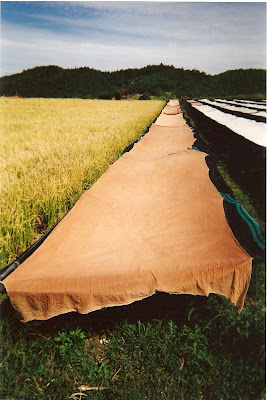 The ajummas had to follow behind me at first because my pinning technique was not great. They yelled at me, then giggled and flirted. I learned. Eventually. But my fingers were raw and my jeans were covered in dye spots.
Posted by White Rice at 3:30 AM No comments:

After taking rice, the women cleaned up while the Master, his protege, and I stayed seated on the kitchen floor. The Master was itching for some Soju and with a huge library of options within arm's reach, we were soon pouring each other's cups full. There was a problem however: we had no side dishes to eat while drinking. To solve this problem the Master went to the freezer and pulled out a large cube-shaped block of frozen food. He unwrapped the plastic, placed it on a plate, and put it in the microwave.

I had no idea what he was cooking or defrosting so I waited silently savoring my fruit-steeped Soju. When the microwave dinged he put the food down in front of us. He asked me if I had ever tried it before. I asked what it was and he told me but I didn't recognize the name. He clarified that it was a type of seafood. I still had no clue but mental noted to look it up later.

The Master got a small cup and filled it with red pepper paste for dipping the barely defrosted seafood bites in before eating. He warned me I might not like it. I was not sure if he said I wouldn't like it because it was spoiled, or because it tasted like it was spoiled. The only thing I was sure of was that he had used the word "spoiled" in describing the seafood.

I took a bite. Terrible. I took another bite but dipped it in the yummy red sauce first. Still terrible and only doable if caked in ample pepper paste and chased with Soju. As we finished eating the thawed bits around the edges, the frozen fare would go back into the microwave for more defrosting, then we would pick at the edges some more and eat. Dip and eat. Thaw, pick, dip, eat, drink. Repeat.

When we'd had enough, the seafood was re-wrapped and placed back into the freezer. We repaired to bed. Me to share the mosquito net room with the protege.

I forgot to look up the name of the rotten-tasting seafood. I even forgot the name. And it wasn't until a few days later when we drove into Mokpo and passed a fish market that the subject finally came up again. The Master pointed out the window at some sea fresh creatures propped on display. 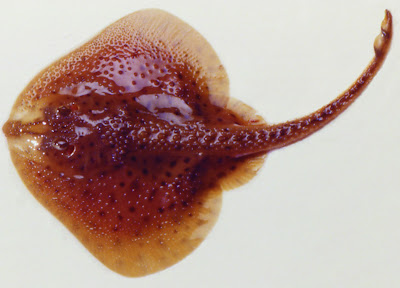 There's a reason ZenKimchi calls it "The hardest thing in Korea to swallow..."
Posted by White Rice at 12:22 AM No comments: