I love the city of Chinju. I have loved it since first I went there. I love how you come up over the hill before entering town and the sides of the highway are so beautifully and colorfully landscaped. I love how you cross the river and see the Chinju Fortress. I love 촉석루 too--even though it is a difficult Korean thing to pronounce. I love the spoken accent, I love the rotaries, and I love my memories of my visit there in 1987 for the 개천예술제.

I have fond memories of going ringside to watch the great 이 준희 dominate at 씨름. 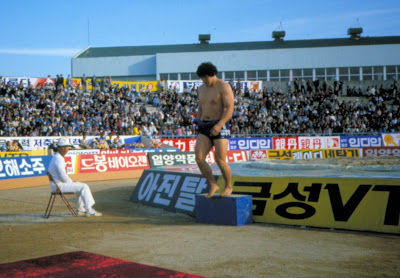 I was intrigued by the cow fighting. 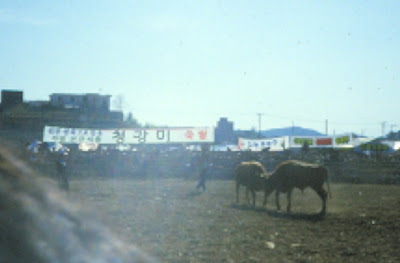 The thing that sticks most in my memory from the first time I attended that festival is the traveling snake oil salesman. There was a large group gathered around as he spoke to them excitedly through a microphone. I couldn't really understand what he was saying, but I could understand what I saw. He brought a random child up from the audience. He forced a pill down the child's throat. He talked for a few minutes while I waited for I knew not what. He grabbed a clear glass and filled it with water. He pulled the child's pants down and scooped out a white ball from the child's crease and dropped the bolus in the glass. He stirred it up and walked around to show the shocked crowd all of the little worms that the magic pill had freed from their colonic domicile.

He brought two more children up and gave them each a pill. The kids were visibly uncomfortable having just seen what happened to the other kid. After a few minutes, the salesman pulled out a long tapeworm from each young boy. He quickly laid them out on a board and smashed them dead. He walked the board around to show us all. Quite an awesome display of on-demand de-worming. I'll never forget that scene from my first 개천예술제.

All those thoughts rushed back to me as Skylark and I entered Chinju city on our direct bus from Seoul...